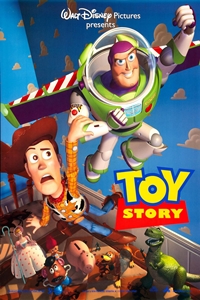 Woody, a traditional pull-string talking cowboy, has long enjoyed a place of honor as the favorite among six-year-old Andy's menagerie of toys. Quick to calm their anxieties about being replaced by newer arrivals, Woody finds his own confidence shaken, and his status as top toy in jeopardy, upon the arrival of Buzz Lightyear, simply the coolest space action figure ever made. Woody plots to get rid of Buzz, but things backfire and he finds himself lost in the outside world with Buzz as his only companion. Joining forces to find their way home, the two rivals set out on an adventure that lands them in the clutches of Sid, a sadistic neighborhood kid who is notorious for dismembering and reassembling "mutant" toys in his bedroom. As "guests" of Sid and his dog, Scud, the two fugitive toys forge a genuine friendship and learn that only through mutual trust and respect do they have any chance of survival.